Today Another Trip To Melbourne

Way back when one of the regular passengers made another trip to Melbourne for a doctors appointment this photo was taken.

There was the choice to go really early or try to avoid the crush of Melbourne's traffic.  While the new mother and her child were deciding when best to travel the choice was to then put it would be better to get to the appointment on time, with the lesser possibility of stress of travel for both mum and child.

At the time of waking up we were abut 30 minutes away from Melbourne Central.  There was time for this quick photo to be taken before the turn off was approaching. 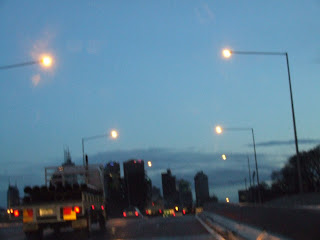 Having traveled most of the two hour straight through trip now there was ample time for the lactating new mum to have a quick brake to take care of the necessities.

What she had not known was an hour earlier the stop by me was made. The coffee caravan people knew me well. Pay as you go past. Hit the toilet block. Come back refreshed and there was a hot chocolate drink and a chocolate biscuit.

Mind you this great cuppa place is still in use. On the eastern side of Pakenham, Victoria. Going down to Melbourne.

Conversely once you are any further than twenty minutes from Melbourne there are few paces for a quiet rest. The cars buzz in grab petrol and ty to edge their was back into the flow of this early morning traffic. Any later time left... even fifteen minutes to the 6am hour you may as well wait it out at home. The traffic at the other end was a nigh mare.

Mind you should you go over Melbourne's 'the Bolti Bridge' and take that wrong turn there are so many paces to fill up with petrol and gas it was not funny. different places different food brands. Effectively the same foods.

Possibly because we did not have the time to explore.... after all we had an appointment to go to. It's a pivotal point when your a taxi driver. You see the county side but there is little time to explore.

Always Wanted To Be Creative On One Platform

Some years ago The internet started to go public. Admittedly that was a little before the computer crossed the path of a fourteen year old...