There is a special little place just as you come past the town post office and pub in Bendoc, Victoria.

Traveling along those dusty roads meant a lot of memories came through The open pasture land suddenly had forest on the left and the Mt Delegate 'hill' on the right.

Deepish trout fishing areas on both sides of the town.

Left by itself Bendoc would simply be assumed to be a lost little place somewhere there in the Southern Alpine area just south of the New South Wales and Victorian borderline.

In fact, to get the children to school in New South Wales, once the Victorian town had lost it's numbers of youth, the school buses came over the border, Picked up and traveled to Delegate or the other way around to get the school route completed.

The town with utility buildings

Just opposite the shop was a park.  Under the shelter, the families or visitors to the town could wait. . 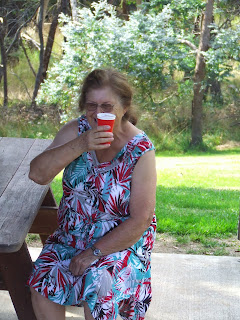 This time around though Patricia and I had been visiting a visiting Aunty of mine.  Beth Browne had come to Australia again.  So Patricia Collins was off to see her sister.
Shanghaied into going along.


Which meant I was driving.

My choice was to return via Bendoc.  Having not been back there since 1993 the trip was done mainly on reading the sun's position and some wild guesswork with the signage.


Things hardly changed in the area.

The rivers flowed one way... down to the sea.  The point was that which sea was that.  The pacific ocean or the Tasmanian sea.

The east is the Pacific Ocean. The south is the Tasmanian sea.

Literally, we came down from Canberra, Past Bombala.  And before we got to Delegate turned left.  Somewhere.

The days were hot.  The water was cold.  Thankfully stored with ice in the esky.

Travel means not deliberately killing off the vehicle.  So while it too colled Patricia and I totally enjoyed that cool water. One afternoon later the time had moved on.  The break was deserved.

In 2020 the sleepy little town of Bendoc was hit by the raging inferno bushfires.  Nothing was to be the same again.