But It's Wet Out There

When it's wet out there there is definitely freedom in the decision to stay here and experience the focused action of staying indoors.
Yesterday was a day for lifting the topsoil and just planting seedlings. The last of the beans have come out and what's left is bare dirt turned and replanted.
Ultimately the excuse tonight is it's raining.  Cold and wet.  Then I wondered if those lettuce and cabbage plants have been washed away The dirt is bare... running out of sunlight meant no more mowing. The rain started last night so the rest of the lawn is not mowed.  So the brick wall really was a great idea to finish off with. 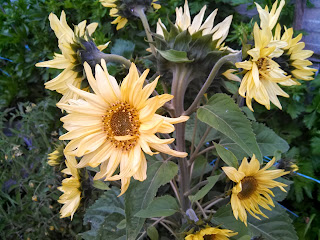 The idea of fresh vegetables while on the road means learning about harvesting what is out there. Incorporating that into small herb plants hanging from somewhere,'
Growing up with a mother who transported the garden in boxes on the station wagons roof rack this idea does not sound so strange. As these Sunflowers have tubers attached under the ground  But the shoots grow up past ten-foot-tall the plan is not to grow these in the car, nor on the roof.
When excellence Persia is the only option you create your own abundance by relying on your deepest inner belief.
My belief is that I simply love sunflowers.  Therefore there is the idea to travel the whole of Australia to find all fifty-nine varieties in Australia Alone.
From the rare dune sunflower that grows in Queensland - in sandy roadside areas.
To know that sunflowers arrived in Australia over a year ago many have adapted to life. Altering DNA strands in the growth of the fittest.
On of the happiest thoughts is driving up the small hill to the driveway here.  The plants cover ut the neighbor's veranda.  The flowers just radiant small spots of happiness and sunshine.
The tubers, along with the seeds on the meal list.
There are huge 'big' sunflower fields in
As the Sunflowers bloom time is from January to March this would be the time to head that way.
There must be a sunflower festival to go too.
at April 29, 2020 No comments:

Looking back there was so much strange with how this day started.  After a really tremulous year and a half things were slowly getting back to normal. Kinda.

The long and short of that call was a quick trip to pick up a member of the family who had lost just about everything.  Other than the old Ute which was losing itself in disrepair.

But these were strange times in a new world that was moving slowly towards a precipitous not many in the public had even been aware of.

Parents, the world over, hear the thing behind the "Hi Mum".  They down tools. Head towards the voice.  It's an instinct bred into most of humanity.

Well, this has been an interesting year.  Turns out by the New Year there was to be a move for all of us [ mum too] literally around the corner. This actually began to happen in April when the

Update 2:
Outside:
Inside: Well when the maintenance on the foundations, ceiling and why not go the whole hog and do the electricals as well! Then the kitchen and also the wet area will be totally done out.
Update 3:
There are really terrific positives - with a sliding scale of experiences that parents prepare for.
Sometimes it takes a couple of times to help a 'child' [yes even though they are 'all adult' now] to move forward.  At this time this is what is happening.
Somehow with this country going in and out of lockdowns it seems that the clusters the United Nations are wanting are what we are experiencing.
That may justify going local in ever-increasing circles.  Experiencing places for a week, or two, more local than was planned to take time with.  Thus the "Off On Adventure" may now have tripped the switch and taken on new dynamics.
Maybe the vehicles will be again stored out the back and very few people will know who is at home.
Shall see you in the next Update In the meantime, there is an interesting way to catch up on the happenings of "number 14' and its occupants.
at April 01, 2020 No comments: